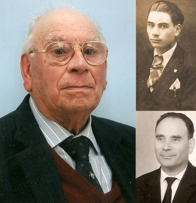 Like any other children, Rui Manuel had a normal childhood but soon revealing his cleverness as it was recognized. At that time children were mainly working with his parents in agriculture. However, this was different for Rui that accomplishes with distinction the primary school.

Rui Manuel was walking to school every single day and became the first boy to complete the 4ᵗʰ grade at that village.

His mother died when Rui was 12 years of age and, as there was no money, he started to work ever since that time.

His first work as a blacksmith at an auto repair garage in Leiria, again walking to and from it for one year long.

During the next year, in 1931 Rui changes to a car and bicycle garage in Porto-de-Mós a company providing driving licence lessons.

Being a fast learner, Rui gets the opportunity to lecture driving licence lessons at the age of 15. His employer provided him a bicycle to come and go along the 30 Km between home and work.

Rui Manuel da Conceição served the military obligations at Tancos compound returning to his regular job as a mechanic and driving licence teacher.

In 1937 he is happy to get a job at Maceira concrete Company working as a mechanical blacksmith till 1971. At the time, married and with one daughter, Clélia, he started to raise his house along with his wife Deolinda who provided blocks during the day for late afternoon application. Rui produced himself all nails and any other materials had recycled origin for low cost construction.

By the 1950´s Rui starts to repair houseware machinery and later on begins commercializing motorcycles and irrigation engines given his entrepreneur spirit.

In 1958, Rui decides to start his own company, Rui Manuel da Conceição along with his working colleague Mr. Febra, who was still working at concrete company at Maceira.

The new company had only one employee, Mr. Sebastião, now retired and still his great friend.

Mr. Sebastião operates the only turning machine. However, every single day people from other companies worked as a part-time at Mr. Rui´s company. Electricity was provided first by a battery generator than by a diesel engine, as there was no electrical power in the village.

At the 1960´s, Mr. Rui acquired a milling machine that became his permanent job position at the company.

This entrepreneurship has always two purposes, the wellbeing for the family and the strong steading evolution for the company.

His older stepson followed his steps and must refer that everyone would like to work there as it is said.

The actual building was raised in 1994 as it is today. Given the political and social conjuncture at that time, it was a recognized fearless decision based on the believes of Mr. Rui.

Today Rui Paulo along with his brother Nuno Santo are the managers of the company following his vision and doctrine.